This my sixth day will be the last day I see my wonderful husband. Sort of anyway. Before he heads for work in the morning, though, he will jogg with me to morning coffee and then put my “drop bags” with food and clothes at my overnight stays. In a couple of days he will also be there when I finish so I’m really not that unassisted at all, just that there is no emergency back-up. Since the weather seem to keep on greeting us with sun and warmth I’m not so worried. 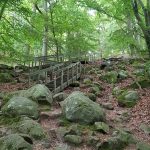 Before he heads home, though, we really need a decent cup of coffee. The fire ban has left us urging for warm coffee and 2 km from our camp site the Stenshuvud National Park has a café so we run there together as a warm up. Through the thick woods  and up a hill and some really steep long stairs – this is maybe the first really steep anything I have encountered so far. The north peak is at 97 meters altitude but we settle for the south peak since the view is at least as astonishing here.

We thought the café opened at 10 (like the exhibition) but when we got there it was closed…. we learned that the café had it’s own hours and did not open until 11. We sat down and talked and after a while we spotted a T-shirt we recognized from Facebook – a GAX Finisher-T! Dear T and his wife has returned to the scene of the crime. Since they passed this place in the middle of the night he really had not seen much of it. We greeted and it was now time for me to get going. 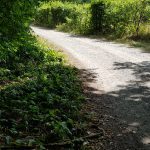 Hugs and kisses and I’m off towards Simrishamn. I restart my watch and after only a couple of kilometers path turns to gravel, and gravel turns to asphalt and so it continues through a marvelous landscape of open fields. I spot a company of wanderers and think, nice, I can say hi and walk and talk a bit but when a car passes they put out their thumbs to get a ride and they get lucky. A bike passes and it’s quiet again, not even a bird can be heard in the hot midday. 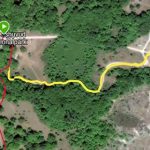 Looking at my GPX file afterwards I realize that, after Stenshuvud, I followed the SL4, not the GAX track. I had read about it but maybe I forgot.

The GAX turns left/east down to the shore and the SL4 continues straight on. This is said to be the hardest part to get right in the GAX. I guess that is partly because it strays from the SL4 and partly because it is in the middle of the night.

However, even though I was aware of the fact that I was supposed to go down to the shore and did begin to do so, apparently I forgot the minute I saw a Skåneleden sign and continued the SL4 on mostly asphalt as described above :D.

The markings and signs was not that good this part so I had to look really close under trees and all around but somehow I got there. At the left turn after the 4 km mark in the picture above (6 km total of the day’s stage) there was no sign at all and picking up my phone to look at the GPX track it here became apparent to me that I had made some wrong turns but it’s not until I write this that I realize that I missed 3 km of the GAX path. 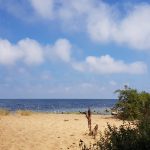 It’s not until after 7-8 km (9-10 in total of today’s stage), passing the town of Vik on small asphalt roads and gravel paths that the SL4 closes in on the shore again since Kivik yesterday. It’s always nice to be close to the sea, I think. I pick some blackberries – there are so many that each day this week I’ve been eating them every day! The area after Vik, called Tjörnevalla, is really gorgeous, small single track paths never more than 10 meters from the water.

After another 3 km I pass the town of Baskemölla and continue along the shore. Single paths through some woods but still close to the water, then suddenly a beach with exotic square rock formations, Tobisvik, 3 km from Simrishamn, my destination of the day.

It’s now apparent by the increasing amount of tourists that the east coast is more popular than the previous parts I’ve been been. Bathing, playing, drinking, they look at me as if I’m from outer space – running in this heat? By this time I’m quite dirty, sweaty since there has been no really good place to do laundry, but tonight it will!

I make a wrong turn just after Tobisvik – it’s not really apparent where the path is supposed to go so I follow my GAX track. The path continues on very heavy sand for ½ km or so then turns right passing through a camping on asphalt, continuing on a brand new bike path passing several kiosks and I’m dying for an ice-cream but the lines are huge and I’m so close now I just keep on jogging and suddenly I enter the town of Simrishamn!

I check in at the Svea Hotel and get the most horrible room on top floor, cigarett smoke from below, barely room to turn around and no ventilation or AC. They gave me a dirty, fan full of a thick layer of dust and I asked for some ice and it helped for like 5 minutes. The poor staff could not do anything and after they quit in the evening there was no way of getting more ice. The cigarett smoke ended around midnight but at 4.30 it reappeared. I complained but still have not get the compensation the promised.

Anyway, I had a splendid herring and mash down at the harbour and shopped some more fruits and stuff in town so I had a party anyway.

As always, here are all my pictures of this day’s stage!