After 10 days of no running just longing it’s finally time! After a sparse breakfast at Ahlberga B&B we drove to the start in Ystad. With 1.5 liters of sports drink in my running vest bladder and some nuts and dried fruits I start a bit away from the real GAX start just because there was a sign there saying “Snogeholm” 27.5 which was the area to where I was. Funny, though, the sign said over 27 km because the official stage is said to be 24 km.

I lost track of the path in the city, of course, maybe because of the crowds but I had the path ready in my phone and fairly easily found my way back. Cobble stones and asfalt, a little park and then a bike path. The heat is striking but I like it. The alleys of trees sometimes give shade but mostly is all sunny and 30 degrees Celsius and more.

After only a few kilometers, the typical Skåne landscape hits you – open and vast fields of crop, corn and alike stretching far, far. Not much altitude gain but almost always a bit up or down, slowly.

The rather boring asfalt turned into a gravel road after approximately 5 km and more beautiful billowing heaths. So far the path is very well marked if you don’t take into account that the distances felt a bit odd and did not quite add up for me. The splendid markings would continue to be so the whole day and although there were several parts of boring asphalt with fast cars it was not as much asphalt as I had expected.

By the lake Krageholm with all its birds I realized I hade quite a bit left and I was already out of drink. I con

tacted my support, who now was on his way for a bike ride, and we decided to meet up for a refill. We have shared GPS locations on our smart phones and that almost always works good enough. If we want more accuracy we use Wikiloc with live tracking – seems to be more stable for me than Garmin’s own live tracking.

After the refill I got company for a few kilometers although the path was not suitable for a road bike at some parts but that sandy uphill would definitely suit an MTB. This hill was actually the toughest part of all day 1 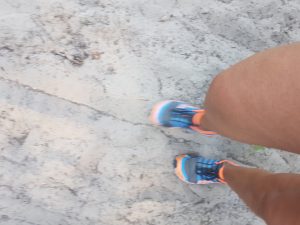 Entering the area of Snogeholm I were to experience the sand for the very first time. So strange. Suddenly, in the middle of the woods, there it was – soft beach sand giving away for every step you take, making it a tiny bit more difficult. Little did I know that this sand would set the tone for the rest of my journey.

After some freshly picked blackberries for dessert and talking a bit with our Danish and Polish neighbours we tried to make us a nice place to sleep of the stuff we had but it turned out to be a bit to hard ground and it was hard to fall asleep.

All in all I ended up running more than expected, roughly half of the distance. The stage was marked “easy” at the Skåneleden webiste and I agree – not much altitude gain and nothing too technical, not even in the woods, apart from the sand that only was a bit heavy for a short period.

Below are all my pictures in order of appearance.