What a wonderful relaxing birthday my lovely hubbie arranged for me at Brösarps Gästgifveri yesterday. Massage, sparkling water by the pool and dinner was the best present ever because today I was able to run again!!!!

The first couple of days had to be a bit longer due to the lack of housing and camping sites but it also turned out to be a smart move to keep up morale – having done almost 50 km after only two days makes you feel on the move in a really good way.

From having moved a bit north-east for a while now the SL4 continues more straight east and just slightly southwards until it hits the seaside and makes a sharp turn continuing straight to the south. But first things first.

As our housing is in the city of Brösarp I have 1.3 km to get back to the path. I pass over Verkeån by the 500 years old mill “Bengtemölla” and start today’s stage on a quiet gravel road passing the city limit into the boundaries of the city of Simrishamn.

The gravel turns to a small path over old railway tracks near the 2 km mark and then to gravel again for a short while before it becomes asphalt quite soon thereafter.

The asphalt continues for 1.5 km then it turns right and onto the fields. Between 3.5 and 5.5 at Haväng the path passes over the road five (5!) times on some kind of wooden bridge passings made so not animals on the pasteurs cannot climb over and each passing means two of these wooden thingies – not a big deal really but it seemed ridiculous to change sides that often instead of just keep on walking on one side – it all looked the same but I guess there is some kind of logic behind it… or not. 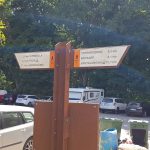 Here at Haväng my companion and support, my super hero, meets me to cheer. There’s also a gazillion cars and tourists which is something I haven’t seen for ages, luckily. Here is also where Verkeån ends and our eyes first meet the sight of the sea. What a sight for sore eyes! Living by the sea, waking up to see it every day, is something we’re used to so, after several days, this is really a blessed sight. 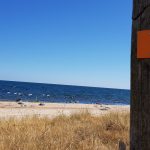 After Haväng the path continues southwards along the sea. For me it is not clear at all how to follow the markings at this time so after a while I just don’t care about the physical signs and follow my GPS track because the markings are really not consistent at all. Sometimes it seems as if you’re ment to keep eyes on the orange marked poles by the sea and sometimes your ment to follow them, for real… I still do not get it as you may notice :). 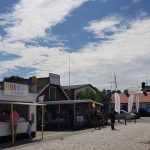 Having made som wrong turns without any real disasters I did get a bit annoyed but not that annoyed that it couldn’t be cured with an icecream just south of Vitemölla (9 km). Cobblestones and asphalt – i continue refreshed!

Like every day today is hot, around 30 degrees by now, and I still love it. To Kivik, at 11 km, it’s all asphalt but thereafter, asphalt turns into gravel, gravel into path and the trees offers some shadow but not for long. Refreshed from that icecream a greet the asphalt again and pick up the pace. 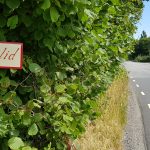 No walking in between anymore. 12 km, 13 km. My husband sends a message that he will meet me and at 14 he appears. He knows me so well he need only see me for a second to spot the focus in my eyes and he turns around and continues behind be with wonderful pep talk. By now the cars are jamming up from all the tourists going to or from the Kiviks press. I get a bit annoyed from them not keeping distance but I’m to focused on keeping my pace so I soon forget.

And there it is! The parking at the north entrance of Stenshuvud National Park!

The camp site is situated not far from the parking of the National Park a place called Hällevik. Your not allowed to put up your tent until a certain time of the day and since it was too early we went down to take a bath but found no really good spot so I just lay there, in a tree.

The ground was super hard, like the one in Raftarp, maybe partly because of the drought. We were first to put up our tent but got company later on by five other campers. One couple were really social – fun!

We had ready-made grilled chicken, corn on the cob and carrots for dinner. A glass of red whine and my eyes started to roll. Time to go to bed. Falling asleep took some time though since the camp site was right by the Kivik press and it did not stop making very loud noise until 11 p.m. but I managed.

Here are all my pictures of this day.